Milk: sustainability vs nutrition - is it a trade off?

Sustainability has never been more important, with plastics having a devastating impact on wildlife and the environment. Most of us saw David Attenborough’s Blue Planet II where an albatross tried to feed plastic to their chick thinking it was food. However this raises a question, does going plastic free have to be a trade off with nutrition?

Like many of us the Oliver family from Berwick want to reduce the amount of plastic we use but shop on a budget. One item they purchased frequently was milk in plastic containers, but unfortunately switching to glass bottles from a milkman was not available. Instead they were advised to make their own ‘milk’ by soaking oats in water by a Sustainability Consultant but at no point was the difference in nutritional value between cow’s milk and oat milk addressed.

In recent years cow’s milk has received bad press for having a negative impact on the environment due to the greenhouse gases released during its production. However while this is true, and milk alternatives have never been more popular, these alternatives often cannot compete with the nutritional value of cow’s milk.

Cow’s milk is a good source of protein, vitamins and minerals which are required throughout life. From rapid growth as children to maintaining bone density as adults, plus increased demands for nutrients during pregnancy and breastfeeding (BDA, 2016). The key nutrients found in cow’s milk include protein for growth and repair, calcium for bone development and maintenance, iodine for healthy skin and brain function, vitamin B12 for healthy red blood cell function, and vitamin B2 for energy release from food (BNF, 2019).

Table below shows the average nutrients for cow's milk and milk alternatives (adapted from SR Nutrition).

There are plenty of reasons to switch to an alternative milk including cow’s milk allergy, lactose intolerance, animal welfare and sustainability. However this does not have to be at the cost of lower nutritional value. Professional bodies such as the British Dietetic Association and the British Nutrition Foundation, in addition to Registered Nutritionist Charlotte Stirling-Reed all recommend choosing alternative milks that are unsweetened and fortified with nutrients such as calcium, iodine, vitamin B12 and vitamin B2 to replace cow’s milk.

In conclusion, making more sustainable food choices does not have to compromise nutrition but it does require careful consideration if foods are being removed from the diet, especially for children. 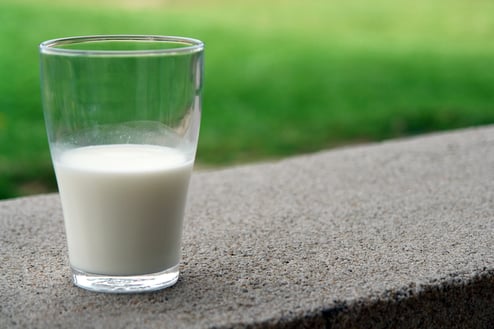 Sarah is Customer Support Manager at Dietary Assessment and is a registered Associate Nutritionist (ANutr) with an MSc in Nutrition from the University of Leeds.