Trust Me, I'm a Doctor - are Huel shakes as healthy as they claim?

We live in a world where everyone has increasingly busy lifestyles. Often we don't have the time to cook for ourselves or meals are simply forgotten. But could an instant meal replacement shake really be our future diet? In BBC Two's Trust Me, I'm a Doctor episode 5  Dr Alain Gregoire tested the meal replacement product Huel.

Huel is a new generation of meal replacement shake made from oats, peas, rice, flaxseeds and coconut. Huel state that their shakes are 100% nutritionally complete, and are a perfect meal when time is short and you're out of the house.

With the help of Dr Bernadette Moore from the University of Leeds, Dr Alain Gregoire undertook an experiment, eventually converting his diet to solely Huel shakes for 4 days. Alain continued his normal diet for the first 3 days, then introduced one Huel shake a day for 3 days, followed by two shakes a day for 3 days, before consuming only Huel shakes for the last 4 days. Throughout the experiment the nutritional analysis tool, myfood24, was used to track his nutritional intake. For this to be possible all the Huel nutrient data was added to the myfood24 food and nutrient database. Alain was able to immediately use myfood24 and the results were sent directly to Bernadette to analyse his nutrient intake. Alain's blood glucose, fat and cholesterol were also measured before and after each meal.

At the start of the experiment Alain's weight and body composition were measured, along with his blood glucose, fat and cholesterol levels. myfood24 was used to create a nutritional clone of the Huel shake, a breakfast made of eggs and salmon on bread with a side of fruit and yoghurt. After breakfast Alain's energy expenditure and how hungry he felt was recorded for 3 hours. After his 10 day Huel diet, Alain's measurements were repeated with his last liquid breakfast. 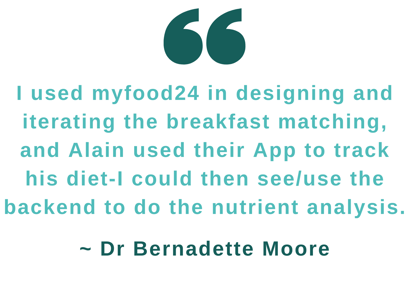 Over the course of the experiment Alain lost 1.6 Kg in weight. This could be attributed to the fact that on average he consumed 400 calories less each day whilst on the Huel diet. Alain's blood fat levels, which were high when starting the experiment, had come down to a healthy level. This was especially significant after his evening meal. However, the downside to Huel shakes was the rapid energy expenditure. For the solid food breakfast the number of calories used by Alain's body and his fullness, was sustained for longer than when having Huel. This is because solid food is digested slower by the body, keeping you fuller for longer. Alain also commented that he missed the social aspect around food, eating with friends and family, and the enjoyment of prepping and cooking a meal.

While the Huel diet produced some improvements to Alain's body, it is important to remember that Huel should not be a complete replacement for solid food. Our bodies need varied diets including a range of different food types, not all obtainable from Huel shakes. However, in a busy lifestyle Huel can be a healthy replacement for occasional meals.

To find out more about the experiment read The Conversation article.

Chemical biology PhD student at the University of Leeds. Working with myfood24 on a 2 month marketing internship.