Tried Veganuary? Here's some nutrients to look out for on a vegan diet.

In 2021, more people than ever before signed up for Veganuary. With this there has been a huge rise in the availability of vegan products across supermarkets, fast food outlets and restaurants. McDonalds introduced the Mcplant, an all-new vegan burger Kettle chips released a Sheese and Red Onion flavour and even Burger King have jumped on board with a zero-chicken burger. But is it possible to still have a nutritionally balanced diet whilst being vegan?

Read on to find out about some of the most important nutrients to be aware of whilst on a vegan diet and ways you can ensure you’re getting enough:

One of the most common concerns when following a vegan diet is eating enough protein - an important macronutrient required for muscle repair and hormone production. Proteins are made up of amino acids and 8 of the 20 amino acids are deemed essential because humans can only obtain them through their diet i.e. the body cannot synthesis them. Animal protein sources are considered complete as they contain all 8 essential amino acids whereas, most plant protein sources (apart from quinoa, buckwheat, and soy) have at least one essential amino acid missing.

Iron is important for healthy brain growth and development but perhaps most well-known for its essential role in maintaining healthy blood. Iron is the main component of the protein haemoglobin – found in red blood cells, which transports oxygen around the body. There are 2 types of iron: haem, only found in animal tissue i.e. meat; and non-haem, found in plant-based foods. Due to specific transporters present in the large intestine, haem iron is more easily absorbed by the human body; thus, more bioavailable.

Since haem iron is mostly available in animal products, it is important to consume non-haem sources of iron when following a plant-based diet to prevent anaemia. These include avocados, spinach and kidney beans.Vitamin C may also enhance iron absorption in the body, so it is recommended to pair high iron foods with ingredients high in vitamin C such as citrus fruits, broccoli or brussel sprouts.

Vitamin B12 is essential for DNA synthesis, metabolism and functioning of the nervous system and is typically found in animal protein and dairy sources - animals store B12 in their liver and muscles and so pass it to their eggs and milk. Given that meat and dairy are good sources of B12, those following a vegan diet can become deficient in it.

Whilst it is possible to get some B12 from plant-based sources for example, in fermented plant foods and seaweed derived foods they do not contain enough B12 to meet the reference nutrient intake (RNI) alone. Some foods are fortified with B12 which can be an additional dietary source of the vitamin such as marmite, cereals, soy products and nutritional yeast.

Given the limited sources of B12 in a vegan diet, supplementation of vitamin B12 may be required.

Vegan diets may also be low in calcium given that dairy products, such as milk and cheese contain high amounts of calcium and are often common sources. A recent study investigated bone health amongst vegans and found that vegans had lower bone health, due to lower levels of calcium biomarkers present.

It is still possible to increase calcium intake through plant-based sources this includes pulses, sesame seeds, dried fruit, brown and white bread (in the UK all brown and white flour is fortified with calcium). 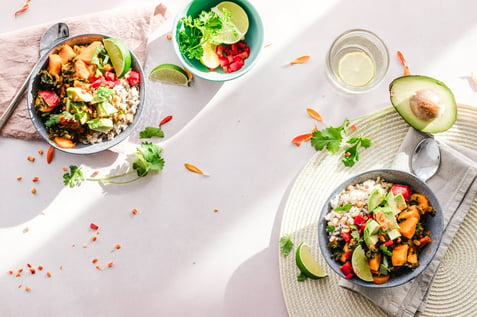 The benefits of going vegan:

Although special attention is required to achieve a nutritionally balanced diet, reducing intake of animal products has been associated with a myriad of health and environmental benefits.

Taking the research world by a storm, there have been many emerging studies investigating the health benefits that veganism has to offer. A recent study published in the BMJ  has shown that those following a vegan diet have a lower risk of heart disease due to the higher amount of fibre they consume and the lower levels of cholesterol and salt in their diet. This is likely due to vegan diets containing less processed foods and more fruits and vegetables.

Studies have also shown that following a vegan diet, can reduce the likelihood of developing type 2 diabetes. This is due to the consumption of whole grains and fibre rick foods that can regulate blood glucose levels and improve glucose homeostasis.

There is also a rise in the number of athletes that have followed a vegan diet including Venus Williams and Lewis Hamilton, which shows that if done correctly, it is possible to have a healthy and balanced vegan diet.

Many of the health benefits associated with plant-based and vegan diets are due to larger consumption of fresh foods like fruit, vegetables and legumes and less processed foods. However, as veganism becomes more popular, many food companies and fast-food outlets are creating new highly processed food which can be high in sugar and/or salt which may reduce the health benefits associated with veganism.

In recent years there’s been more of a push for people to live more sustainably and as a result the environment has become an important aspect to consider when making food choices. A recent study using myfood24 to analyse individuals’ diet-based greenhouse gas emissions (GHGE) found that non-vegetarian diets accounted for 59% more GHGE compared to vegetarian diets and that 32% of diet-related GHGE were due to meat alone.

To summarise, going vegan may be beneficial when done correctly and with accurate dietary intake monitoring. Using a validated dietary assessment software such as myfood24 is a reliable way of understanding nutrient intake and may help health professionals and patients make informed dietary decisions.

myfood24 is a robust nutritional analysis software tailored for healthcare professionals, researchers, and lecturers. With a validated database that is quality checked and never crowdsourced; myfood24 provides a quick and easy way to collect accurate diet and nutritional information from participants and patients.

Try a free demo of our food diary or get in touch with a team member for a full walkthrough of our system.

Lujain is a Marketing Intern at Dietary Assessment and is a registered Associate Nutritionist (ANutr) with a BSc (Hons) in Nutrition from the University of Leeds.